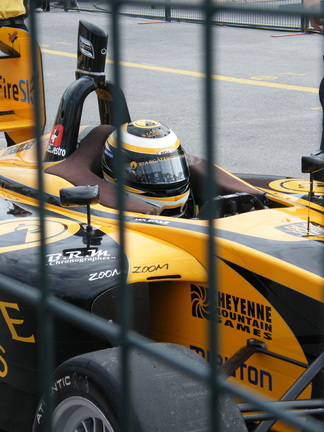 Trois Rivieres is the kind of race I always wanted to get to. A race with plenty of history like Monaco, Macau, or Pau but without all the frills and hangers on of grand prix racing. So in 2009 I was given the excuse to head up to Trois Rivieres when the Montreal Grand Prix was cancelled and I needed to head somewhere else for my racing fix. And it was great. The crowd was good, there was tons of access to all the pit areas, the city was right behind it and the racing was good. You would see drivers in the pits and downtown. They weren't busy trying to avoid fans but had time for quick chats and there were plenty of crew members who didn't care if the chat was quick or not. Teams would let kids sit in the cars for photos, and invite you into the pits to have a good look at the cars.
On top of that I got to see good racing. This is a photo of Simone de la Silvestre about to begin her weekend where she will become the first female winner of the Grand Prix de Trois Rivieres.
Many might argue that the Canadian Nascar series has become the main series for the Trois Rivieres race. They certainly had a much larger field and a lot more star drivers.

As usual my favorite series, the Formula 1600s put on a great show. Hard racing right to the flag. Didier Schraenen of francophone Nascar commentating fame crashed while challenging for the lead in race 1. In race 2 he fought his way through the field to take a well deserved podium.