Why Hungary? Hungary does not have much of a reputation for great racing, but I have always liked the place. The circuit is underrated and I love the flow of the first two sectors. The Hungaroring was one of my favorite circuits to drive on my old F1 game. The circuit is conveniently joined to a city that I would happily visit even on a non race weekend and Hungary serves as a convenient converging point for racing fans from many surrounding, race mad countries.

The official website for the circuit is www.hungaroinfo.com the site is very good for buying tickets. In the tickets section, most of the Grandstands are shown in 360 degree photos so you get a good idea of what your view will be like, how the seats are, and how the seating numbering works. I hope Circuit Gilles Villeneuve is taking notes!

Ticket prices range from 99 Euros for general admission to 498 Euros for high seats in the Start/Finish line covered Grandstand which is pretty cheap compared to Montreal prices. There is a 15% discount on prices if you buy before the 31st of October.

Most of the Grandstands are located on the main straight with the exceptions of 2 Bronze stands at the top of the hill of turn five through to turn six. Silver 5 is located in possibly the dumbest place ever and you will not see mention of it again on this website. 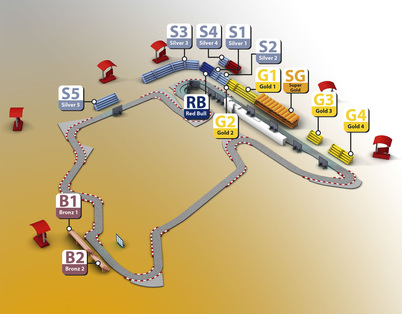 In Hungary, almost all of the Grandstands are located on the main straight so the choice is between last corner exit, facing pit lane, or turn one entry. General admission also has a good reputation at Hungary. I'll look into stands in more detail below.
At Hungary, high seats sound much better than low seats (ie low row numbers)

Super Gold (and its equivalents) is not usually my style. Sitting in the middle of a long straight and paying a lot of money to do so, does not strike me as wise. However, in Hungary, I would think about it. Super Gold is not terribly expensive, all the stands are in more or less the same place anyway, and there is a roof. Hungary could be a good race to witness race starts, pit lane action, and podium ceremonies.

Gold stands occupy the main straight from in front of the grid to the first corner. As such they should be a good place to see the start and any overtaking that might occur.

Silver stands are all in the same kind of section so I will talk about them as one block. Silver stands look at the exit of the last corner and the pit entry. The Red Bull stand is in the same location and is the same price as a Silver stand. I don't know if you get a free Red Bull or not but that wouldn't be much of an incentive to me.
Silver 2 has the advantage of being lined up with the back half of the grid for the start and should have an OK view of the first few pit stalls where the more successful teams should be.
Silver 4 has the advantage of being further elevated and having a good view of the back straight.
Silver tickets are 250 Euros for the weekend

General admission has a good reputation at Hungary. The track was wisely designed in a natural ampitheatre and so the views should be good from a lot of different spots. Also, given that not much of the track is covered by grandstands, there are plenty of good spots to choose from.
Unfortunately, there are few big screens in general admission areas unless you get in beside a grandstand.
General Admission tickets are 90 Euros for the weekend (2014)

I am not a big fan of the Bronze stand location. But, at 99 Euros, Bronze stands can be viewed as a cheap upgrade on General Admission. Walk around the track whenever you want and when you feel like it plant yourself in front of the big screen.
Bronze stands must be close to the train station as well.

Getting to the Track

Unlike Montreal, there seems to be multiple ways of getting to the track. There is parking available, taxis are popular, the train stops nearby and the website has an option for helicopter shuttles! I am going to deal with the train first since it seems like the best option for the price and for avoiding traffic.

Getting to the track by public transport seems like a good and simple option. As you can see on my map below, all you need to do is take the metro/subway/tube  to Ors Vezer Tere and then the train to Hungaroring station. Alternatively, you could get out one stop earlier in Szilaslige which will give you a slightly longer walk, but a good chance to pick up cheaper supplies for the day. Maybe, they even have a pub? and then

Another popular means of getting to the track is by taxi. The track is relatively close to the city and taxi fares appear to be cheap.