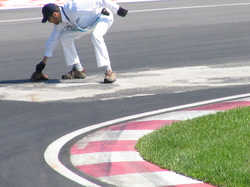 I have stolen some photos from my good friend Red. My photos to come later of a race that included a huge Kubica accident, Hamiltons first ever win, Groundhog dodging, Groundhogs not dodging (see left), and Takuma Sato passing the World Champion in a Super Aguri!
2007 was my first full F1 weekend in Montreal and I spent it in Stade 21 at the entrance to the hairpin. I ended up meeting some great people, who I now get to sit next to every year for 3 days.
2007 was one of the great races at Montreal. I got to see Lewis Hamilton's first ever win. Robert Kubica cart wheeled right in front of us (see the vid below) which was pretty damn scary. I along with plenty of other people thought he wasn't going to get out of that alive. For some reason there was a rumour in the stand after the race that all he'd done was broken a leg. In the end it wasn't even as bad as that and he was able to walk out of the hospital the very next day.
The race also proved to be spectacular for the tyre lottery. Some people like Takuma Sato got it right which meant his Super Aguri managed to out sprint Alonso in his McLaren. I hope you enjoy the different commentators reactions below. 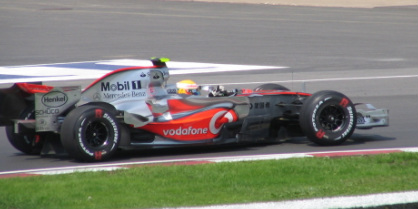