Here is some advice sent to me by a friend who went to the Monaco Grand Prix in 2008. Thanks Pierre.

We could not stay in Monaco given the price tag. So we opted to stay in a town/city to the east of Monaco called Menton. Great little hotel facing the sea. Menton itself was a nice place to spend the Friday given no racing occurs in Monaco on that day. Nice restaurants, some shopping, good beach time, and nice small streets to wander about. For a little extra distance people also opt to stay in Italy which is about 20 to 30 minutes further.

In order to get from Menton to Monaco it was a small bus meandering through the coast giving you a spectacular view of the towns/ocean... It costs 1 or 2 Euros and not packed in the least. You always got a seat. Much nicer then riding through the Metro in Montreal packed like sardines (not when it's early but....).

Our seats were located in Tribune T1 facing the pit row. Last row - which I highly highly recommend. The main reason for it is that the last 8 to 10 rows are actually covered which is an absolute bonus. We were sheltered from the sun and from the rain (which we both had). This really reduces the  amount of gear you need to bring to the track. Being light gear wise in Monaco rocks. The view of the track is somewhat limited from there since you basically get a straight which isn't all that. HOWEVER! You get full view of the entire pit row. Not to mention that all the top teams will be directly across your seat. From here, with a decent lens for the camera (300mm zoom in my case some days), everyone from drivers, team managers, stars, .... walk from the way left where the entrance/exit is all the way across to the right directly in front of you. You get to see right inside the pit garage which was really cool. We lucked out on race day since it rained and the cars had to come in constantly to change noses, tires, etc ...

In between events, being used to the hussle and hassle of moving about trying to find beer/food at Circuit Gilles Villeneuve, we were delighted with the different experience Monaco has to offer. After any  session, you are allowed to exit and go into town (and come back in for the next session). That was the cat's meow! After every F1 event, we would  leave and go up the mountain into town which was a 10 minute walk. We were able to visit museums, the Royal Palace, church where Grace Kelly is buried, etc... However the best part were the lunches... You go from small street to small street on the mountain top and you find all these small restaurants with terrace/patios in the shade. We ate like kings. Used to small lunches in Montreal (or 10$ burgers...), we were now faced with a 3 or 4 course meal with drinks before and wine during lunch for roughly 50 or 60 euros. No crazy crowds, quiet, music playing, exceedingly relaxing. Basically applying the  brakes to the fast pace...breathing....then re-joining. 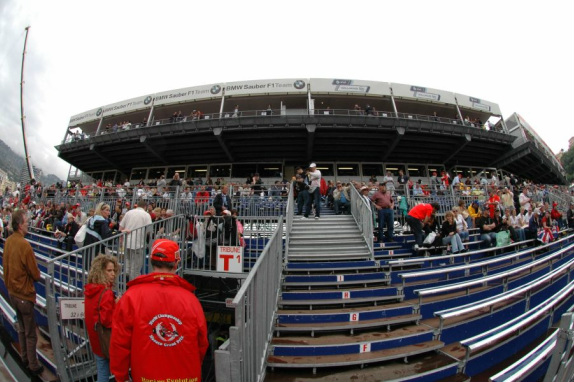 Here is a shot of Grandstand T. Note the overhang covering the seats at the back­

Some Views From the Stand 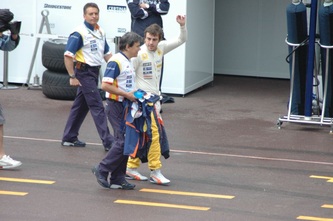 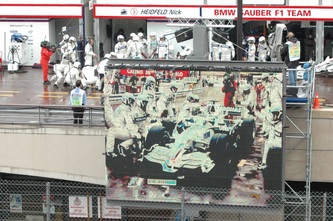 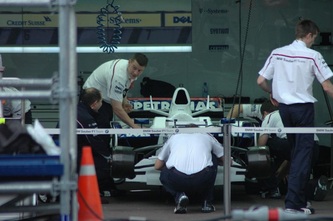 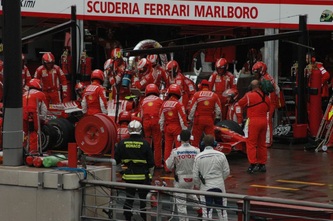 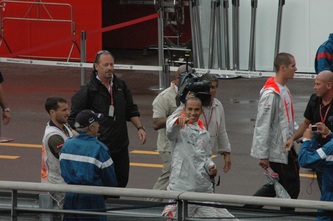 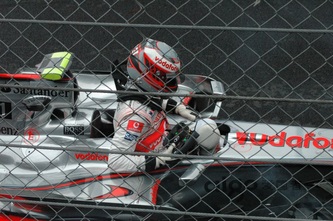 Here is a map of the Monaco track with the Grandstands overlaid.