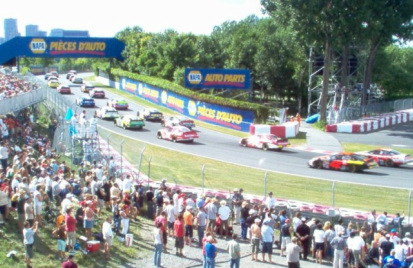 *Sorry about the quality of the photos. These were the days before I owned a camera with a lense*

I was so happy that Nascar was coming to Montreal. I didn't know too many of hte drivers in the field or particularly care for any of the support races. But the seat prices were half that of the Formula 1 seats and I was looking forward to some good old southern hospitality for the fans. I was rewarded in some ways and disapointed in others.

The seats were great. I was on the far left of Grandstand 12 where I could see the cars all the way down the start finish straight to the wall of champions all the way to the cars turning in to turn 3. I don't think you would find better seats at the circuit.
The merchandise was good. I am cheap and usually avoid buying overpriced formula 1 team shirts that I will never wear anywhere but at the race track. But the Nascar stuff managed to be reasonably affordable as well as being acceptable to be worn while in public and sober. I rewarded Nascar by having a big spending spree and buying a t-shirt.

The problems were to do with the race. In an oval race full course cautions make sense. On a road course they do not. Every lap under caution lasted five mintes and every caution seemed to last 5 laps. You do the math. I don't know how many cautions there were but there were too many. And every caution had a good chance of being followed by another on the restart.

But the main problem was that Marcus Ambrose should have won and didn't. I have watched Marcus for years in the V8s in Australia so it was a pleasure to see him dominating in Montreal. Untill under yet another caution he and Robbie Gordon shared a few bumps which lead to Robbie Gordon taking Marcus out of the race at the restart. Gordon was black flagged but that didn't mean that Ambrose got the reward he deserved. I was pissed off.

I headed back to the race in 2009 with tickets from the girlfriend's, brother's work. I was seated in the main stand opposite the pits for free! I even got a free program into the deal. Those corporate ticket holders get treated like kings. The seats weren't great as the fence cut the view to the exit of the last chicane. Eventually the skies opened up and Nascar was good enough to bring along some rain tyres. The rain scared off the corporate ticket holders as well and soon we had plenty of room around us. Once again Marcus Ambrose dominated everyone and once again Marcus finished second. Ron Fellows won out on an early pit stop and caught the red flag at the right time.
It was worth being on the main straight once. Just to see the cars accelerating away but I certainly wouldn't pay to sit there. In my view it is a good place to stash away the corporate arseholes who wouldn't know a race from a traffic jam.