Spa was great! Everything about it was great. OK, maybe the weather could have been a little warmer, but we had a great race. I loved Spa because I got to see a great track, experience the weather changes of the Ardennes and live Formula 1 for 24 hours a day a the camp site. There is so much to write about that I am going to have to break it down into sections.

I took public transport from London on Thursday morning and almost everything went smoothly. Eurostar to Brussels, no problem. Train to Verviers, easy. The 395 bus to Ster, almost perfect. Finding the campsite, problems. The bus dropped me off in Francorchamps which is just up the hill from La Source and people had differing views on where the hell Ster might be located, which was where I was camping. So I set off with three heavy packs in the hottest weather we had all weekend. Eventually I got to a parking area and asked the guys where my campsite was. They had no idea but got on the radio and found out for me. On top of that they gave me a lift. That was something I loved about Spa. All the locals were friendly. People constanly offered help and lifts. They must get fed up with 100, 00 people descending on their small towns but they never show it. Very welcoming and friendy which was a relief.

On and around the track

On Friday I did a big tour of the track from the Bus Stop to Blanchimont to Pouhon to Les Combes to Kemmel to Eau Rouge. At Spa there are tons of good places to watch from and I would recomend that on the Friday and Saturday you go and have a look around before settling down for the Sunday.

The weather is weird. People will tell you this but untill you experience you won't know what they mean. I thought OK it rains I've seen rain before. But at Spa it would kind of rain every 15 minutes for a couple of minutes and just when it had cleared up it would pour down from a blue sky. We would get soaked on Friday at Pouhon and then wait for it to arrive on the pit straight and then on Saturday and Sunday we would get it first at La Source. A friend of mine said a local told him that if you don't like the weather in Spa wait 10 minutes because it will be completely different. I felt my first rain in Spa on the bus as it came in through the sun roof. Forget weather forecasts, come prepared for everything, get to your seat and look at the sky.

Ster is a tiny town. It has one pub and that is it. I was there every night and it was fantastic. The pub was tiny, but the beer was cheap and good. On top of that it was the first racing pub I have ever been in. The walls are full of posters and memorabilia from the years gone by.  And just as good as a cold beer and a chat was the fact that the campsite at the Elephant was quiet enough that you could sleep at night. 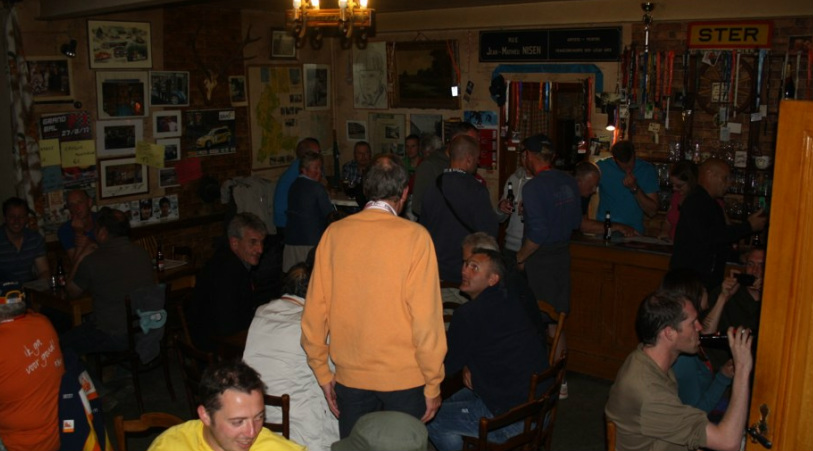