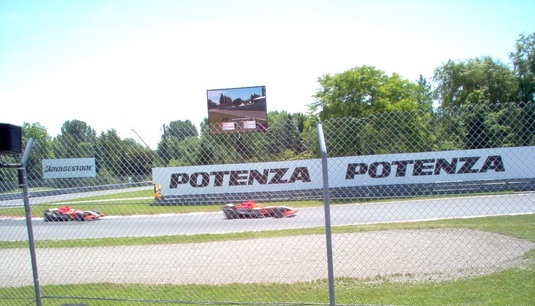 My first view of the Circuit Gilles Villeneuve from grandstand 33 at turn 7.
It was great to be able to go to a Grand Prix in my own city for the first time. No long road trips or cheap hotels!
The race was a good one for a number of things. Montoya fought his way through the first lap taking the fight to Rosbergs Williams. Unfortunately his damaged suspension put him into the wall of champions and his F1 career would finish at the very next race when he took out his teammate Kimi Raikonen at Indianapolis.
Things settled down for a while untill Villeneuve managed to get caught out by a combination of a slow Ralph Schumacher and a very dirty track. He slid into the Honda wall right in front of me and brought out the safety car.
Fernando Alonso managed to hold off Schumacher for the win and continue his winning ways onto taking the title.
It was also worth being there just so I could be one of a few people who could say they saw the Midland (Albers and Monteiro above) and Super Aguri teams in action. 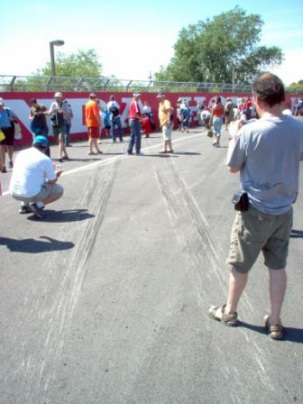 Tyre tracks of Jacques Villeneuve who ended his race in the Honda wall right in front of our grandstand!